There are various kingdoms in Stonehearth with three playable kingdoms, The Ascendancy, Rayya's Children, and The Northern Alliance. The non-human races have no announced time frame for when they will be playable, the Dwarves are planned to be added by ACE. Additional community created races and kingdoms are playable as well, added through modding.

Each race has their own playstyle depending on the biome you pick for them to live in with their own starting talisman. 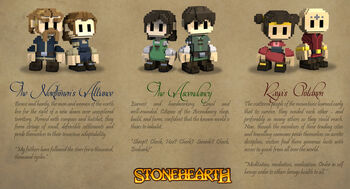 The Humans are the only playable race implemented as of version 1.1. The Humans are split into three kingdoms, each of which has it's own playstyle, along with benefits and drawbacks.

Earnest and hardworking, loyal and well-rounded. Citizens of the Ascendancy chop, build and farm, confident that the known world is theirs to inhabit.

The Ascendancy, released in Alpha 12, is one of the three playable kingdoms. Their starting talisman is the Carpenter's Saw, as Ascendancy villages are typically found in temperate biomes with an abundance of trees. This race is the default Stonehearth experience. The player’s time is balanced between building, crafting and fighting.

They appear to be based on Medieval Northern and Western Europe cultures.

“Meditation, mediation, medication: Order in self brings order to others brings health to all.”

The southern people of the mountains learned early that to survive, they needed each other, and preferably as many others as they could reach. Now, though the members of their trading cities and traveling caravans pride themselves on ascetic discipline, visitors find them generous hosts with access to goods from all over the world.

The Rayya's Children, released in Alpha 13, is the second playable kingdom. Their starting talisman is the Potter's Cutter, as Rayya's Children villages are typically found in desert biomes that lack trees. They also have new trading encounters. The people of the south are still most at home in the desolate canyons to the south and east. They are populous and clever; they have the best artisans in the world. They trade often, and to great advantage compared to the other kingdoms. The player's time is split between trading and crafting.

They appear to be based on tribes and cultures Middle East and Northern Africa, circa 1000 AD.

“My fathers have followed the stars for a thousand, thousand cycles.”

Brave and hardy, the men and women of the north live for the sight of a new dawn over unexplored territory. Armed with compass and hatchet, they form strings of small defensible settlements and pride themselves in their tenacious adaptability.

The Northern Alliance is the third Human kingdom. Their starting talisman is the Mason's Chisel, as Northern villages are typically found in arctic biomes with large mountains and water bodies. The people of the north are tougher and stronger than their inland kin, but their settlements are more surveyors’ camps than cities. Merchants, immigrants, and luxury goods are few and far between. They thrive in cold empty lands that others have forgotten. The player's time is split between fighting, hunting and exploring.

They appear to be based off Viking culture and are likely set in colder biomes, based on Scandinavia. They will have cultural and construction options suited to living in the coldest areas of the world.

Additional races are planned to be added to the game by the modding community with ACE, but no time frame is known about when they will be available to players.

The Dwarves are a playable race that was added to the game after the Kickstarter reached the $750,000 mark. Though they are cut from the final version of the game, the ACE modding community are planning to add them in the future.

A steam message was released by Radiant Entertainment saying that their last update/patch (v 1.1) would be their last work on the game. No new stuff would be made and no further support would be given by the developers for bugs when we enter the year 2019. All planned (or promised) additions to the game, that have not been implemented yet, are scrapped. So here are the know races in the game.

The Red Kiln, also known as the Red Empire, is the empire of Orcs and Goblins. These ferocious creatures stand as the main threat to the player, and will often attack the player's cities and villages in order to test their strength. Within the Red Kiln, strength is a cultural important thing, to the point where they will challenge anything they find to see if they are worthy, and even kick out creatures of their own race if they are deemed worthy.

Throughout this entire cycle, the Red Kiln has been at war with the humans. Though they have won the war with the Phoenix Empire 300 years ago, a valiant warrior known as Cid secretly made a deal with the Red Kiln, in which he asked them to give the humans 300 years to become worthy opponents. The Red Kiln accepted this, and left the humans alone for 300 years, to now come back and face the player with their campaign.

Within the Red Kiln, the player will encounter different creatures, ranging from Goblins to Orcs, the player will face warriors, archers, healers and even large ogres that will break down doors and gates.

Often the Red Kiln will create small camps near the player as a base of operations. From here, they will attack the player and attempt to kill every hearthling within their towns. Within these camps, a leader is spawned. If this leader is killed, the camp will be defeated and the player will be safe until a next camp spawns.

The Amberstone Clan is a race of sentient rabbits that live deep underground. As survivors of the previous cycle, these creatures require the magic of Amberstone to survive, and prevent themselves from devolving back to normal rabbits. Though they have had bad encounters with the Goblins and Orcs, they had faith in the 'monkey-like creatures' and reached out to them for help. Clan Amberstone are potential allies to the player, to the point where these creatures can even join the town as villagers.[1]

Though it's not really a kingdom, besides the kingdoms and races named above, StoneHearth contains a lot of wildlife. These wildlife creatures can range from tiny cute critters that innocently hop through your grass planes, to large devestating creatures that will try to kill your hearthlings and destroy your doors upon sight.