From Stonehearth Wiki
Jump to: navigation, search
Work in Progress!

This page is still being worked on. Feel free to lend a hand!

This article is current for Stonehearth Release 1.1 and updated as of January 19th, 2019

Jobs are specializations of your base Worker job in Stonehearth. By promoting your workers to a new job, they will gain access to special abilities and/or crafting recipes that each job provides. Each Job will contribute in some way to defending or expanding your settlement. The game divides up jobs into three categories: Fighters, Crafters, and Others (Producers and Workers). Additional jobs can also be added to the game through mods. 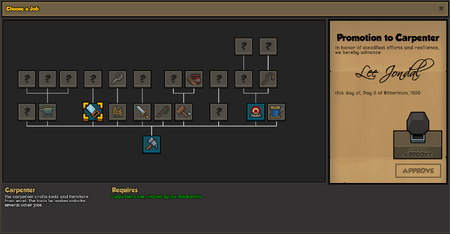 The Hearthling promotion UI in alpha 14.

Promoting is the act of changing a Hearthling's job into another. All Hearthlings start as a Worker, and then can be promoted to any other job, given that you have the right Job Talisman and experience requirements. In order to change a Hearthling's job, you can either enter the "Citizens" menu and click the name of the Hearthling you want to promote, or click on the Hearthling itself(?). Then click the "Change Jobs" button and you will be presented with the promotion screen (pictured right). Select which job you want to change to and click the stamp to approve the promotion. The Hearthling will run to the respective talisman, drop their gear, and equip the new talisman required by their new job (in the case of promoting into a Worker, they will immediately drop their gear and run to an available Worker's Outfit).

The "Choose a Job" screen shows all the information about each job in the game. Each job shows its icon, along with lines connecting one job to others that have prerequisites. If the Hearthling you are inspecting meets the requirements for a job and you have the required talismans, then the job will have a blue background. Otherwise,it will have a gray background. The talisman requirements can be met by crafting the required tools at the named workshop.

Overtime, Hearthlings can level up in their Jobs (with the exception of Workers). They do this by gaining experience through their respective roles. All of the jobs in the base game have a maximum of six levels, and each level's experience requirement is calculated with this formula[1]:

Every time a Hearthling levels up, they will gain 10 health and sometimes a helpful perk. A list of perks for each job can be found on each job specific page. Experience is not carried over if you change a Hearthling's job to another. However, the levels, health and perks they've gained are not lost.

Fighters patrol the town, attack nearby enemies, and have combat-related abilities. They will automatically defend your town or you can send them off on a mission of your choice. They can't haul items, mine or build. There are different combat roles among these Fighters, as listed below.

A ranged combat unit that shoots foes with arrows

Archers can equip a bow and a quiver. There are currently only two quivers available: spiky quivers that slow enemies and fire quivers that burn enemies. The player can also change which arrows the Archer will use between the equipped quiver's arrows, or default arrows.

As Northern Alliance a level 2 Archer can be promoted to a Footman.

Clerics are promoted from Herbalists. Clerics heal wounded hearthlings and provide buffs to them in combat.

The Footman is a melee fighter. A good choice for the backbone of your town's defense.

Footmen are promoted from Workers using a Wooden Practice Sword or as Northern Alliance from a level 2 Archer, and can be further advanced to a Knight or an Archer if you're not playing as Northern Alliance. once they're level 3. The Footman is one of the three combat jobs.

Footmen can use either of the two kinds of melee weapons: one-handed weapons and a shield, or two-handed weapons. When hovering over a Footman you can select what type of Weapons the Hearthling will use, the choices are: Sword and shield, Dual Wielding, and Two handed weapon.

They can equip armor and helmets as well as their weapons

A defensive combatant focused on protecting allies from harm.

Knights, after promotion from Footmen, use the Knight's Shield as their own shield and also get their own armor. They can also only use one-handed weapons and a shield. They cannot use two-handed weapons.

Crafters can make Items, Furniture and equipment for your town.

The blacksmith refines raw ore into metal bars, then uses those bars to craft weapons and armor.

Blacksmiths are promoted from Workers using a Blacksmith's Hammer and can be further advanced to an Engineer when they are level 2. They craft metal armor, weapons, and eventually high capacity storage.

The carpenter crafts tools and furniture from wood. The tools he makes unlocks several other jobs.

Carpenters are ideal for temperate biomes due to the abundance of trees and wood. A Carpenter's Saw is also spawned with starting Ascendancy villages and is their starting job. The Carpenter can also craft the Rough Wooden Shield and Recurve Bow.

The cook makes delicious, hearty meals from base vegetables and meats.

Cooks are promoted from level 2 Farmers using a Cook's Spoon or if you're playing as Northern Alliance from a Worker. They cook various meals that take longer to rot than raw ingredients and increase the happiness of your hearthlings, they also make animal feed for the Shepherd's creatures. They also can craft the Donation to the Church of Plenty.

In order to craft the Cook's items they require their Stone Cauldron, Stone Mill Grinder, and Stone Oven.

Engineers are promoted from level 2 Blacksmiths using an Engineer's Wrench. They craft turrets that attack nearby enemies in front of it and traps that trigger when an enemy steps on it. Enemies can destroy these structures. They have a limit on how many turrets and traps they can place. They can also craft Ironclad Doors that can be locked by the player to lock hearthlings in a location.

Herbalists are promoted from Workers using a Herbalist's Staff. They use flowers and herbs to craft Tonics and Bandages that they use to heal wounded Hearthlings when they are on a bed. Hearthlings can only be treated every so often. They can also craft Tonics, witch grant various buffs to all of the Hearthlings of the town.

At level 2, the Herbalist can craft the Cleric's Tome and advance itself to a Cleric.

The Mason crafts building materials and decorative items from stone.

When playing the Northern Alliance the mason can craft

The Mason is also the only job, besides the Worker, to be able to both mine and build.

They require a placed Mason Workbench and the Mason's Pedestal

Makes useful goods from clay. Upgradeable to the Mason

Potters are promoted from Masons (Ascendancy and Northern Alliance) or Workers (Rayya's Children) using a Potter's Cutter and can be further advanced to a Mason (Rayya's Children). They craft clay-related furniture, decorations, and storages.

A Potter's Cutter is also spawned with starting Rayya's Children villages and is their starting job and can therefore craft several Job tools: Herbalist's Staff, Mason's Clay Chisel, and the Clay Practice Sword

The Weaver makes thread, fabrics and hangings from fiber and dye.

Weavers are promoted from Workers using a Weaver's Spindle. They craft decorations, clothing, and armor out of course fibers. They also craft quivers for the Archer.

They require a placed Loom, Spinning Wheel, and a Weaver Workbench.

WARNING: The following may contain spoilers about the game.
Terraforms the environment, creates landmarks and makes golems.

Geomancer is a unique job that can only be obtained through. You promote a Worker with the Geomancer Staff. You get this from the friendly rabbit creatures in the Clan Amberstone Quests. They are then able to craft different stones, which when placed have unique effects upon the landscape. This allows you to create a water source that is infinite or spawn a slab of dirt in the hole you previously made. They can also craft automated workers, called Golems. There are 3 kinds and each do a different job which aid your workers in their tasks.

The Geomancer is also able to create landmarks and cast these onto a spot of your choice. This way you can explore many of the hidden treasures of the game even they didn't spawn on your specific mapseed.

Farmers are promoted from Workers using a Farmer's Hoe and can be further advanced to a Cook when they are a level 2 farmer and are given a Cook's Spoon, Alternatively the Northern Alliance can promote to a Cook Directly from the Worker.

They plow fields, plant crops, and harvest them. They provide a steady source of food, which can later be used by the Cook to make Cooked Food, which can provide certain bonuses and improve happiness. They can also grow Silkweed and Brightbells for crafting materials used by the Weaver and Herbalist. Once you have a farmer that's level 5 they can grow trees for an infinite source of wood.

The Trapper's snares capture and harvests small creatures for a reliable source of food and supplies.

Trappers are promoted from Workers using a Trapper's Knife and can be further advanced to a Shepherd when they are level 2 and are given a Shepherd's Crook. They set up traps to catch small creatures or bugs for their hide and meat in designated areas. Animals are more commonly found in forests. A level 2 Trapper can charm a trapped creature to be a pet/ animal companion (They don't need animal feed, just normal food)

For the Northern Alliance the trapper can catch large game for more food and resources.

Domesticates wild animals and harvests them for food and materials.

Shepherds are promoted from level 2 Trappers using a Shepherd's Crook. They befriend a variety of creatures (poyos, rabbits, and sheep) to bring them back to designated areas to feed and contain them.

These creatures also get hungry and require animal feed crafted by the Cook.

Workers are your base job in Stonehearth. All of your hearthlings start as Workers that can be promoted to other advanced jobs. They don't have specialized skills, but they can do all three basic tasks: building, mining, and hauling. Workers will also use whatever tool they may have to fight Enemies if Town Alert is activated.

It is advised to leave 2 hearthlings as workers because if they are promoted to some jobs they will lose their ability to mine or to build, or both.