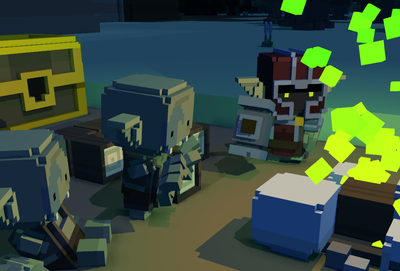 The Goblins are currently a NPC monster race.

"Whips the wolves into a dangerous frenzy"

The Goblin Beast Trainer appears in the second stage of the Goblin War campaign, one in each camp. They wear red armor and wield Iron Maces, Jagged Cleavers, or Stone Mauls.

The Goblin Chieftan appears in the first stage of the Goblin War campaign. They are quite distinct with their horned helmets and skull banners. They are armed with Giant Bone Maces or Giant Bone Axes.

Goblin Marauders will attack your hearthlings and destroy items in your stockpiles. They wear red armor and wield Iron Maces, Jagged Cleavers, and Stone Mauls.

Goblin Thieves will steal items from your stockpile. They wear black hoods that shroud their faces in darkness and wield Bronze Swords, Jagged Cleavers, or Stone Mauls.

Goblin Workers will carry items back to their stockpile. In some events they will steal items from your stockpiles. They are armed with the same tool all Workers are armed with.

Tamed Wolves appear in the second stage of the Goblin War campaign. If the Wolf Cage is destroyed they will flee. If left alone they will attack your village and destroy items in your stockpiles.

The Goblin War is a campaign triggered by the Game Master. It currently has two arcs.

"Me dreamed last night. In dream, you make me stuff; we like brothers only me no kill you. Got Stuff?" - Chieftan

When your city reaches a net worth of 3500, a goblin raiding camp will spawn at a distance of 160-180 from your city. The chieftan of the camp will demand a number of items as tribute. If you accept their demands you will be given one day to collect the items.

The arc ends when the chieftan is killed.

Additionally, if you refuse to accept the demands but your town is considered "weak" enough, the goblins may choose to pack up and go away after waiting long enough, this can be seen as a message saying that they won't attack you because there's no glory on defeating a weak town, sometimes however, some gobins may remain behind and aproach your town to attack, this seems to end the campaign short.

"Can't you hear the howling? There are goblin wolves in the woods!" - Refugees

One day after defeating the chieftan, a grizzled traveler named Mer Burleyhands will appear and warn you that goblin wolves are coming. One day and five hours later a scout camp will spawn at a distance of 80-180 from your city. You will get one of two types of messages at this point, a mysterious orc that suggests attacking the camp before they attack you or a group of refugees who encourage you to run and hide.

If the wolf cage is destroyed the wolves will flee into the forest and a new camp will spawn in one day and five hours. If the wolves are left caged for eight hours, they will appear at a distance of 50-60 from your city and attack you.

The arc ends when three scout camps have appeared. After one day, Mer Burleyhands will return, congratulating you on surviving and leaving gifts collected from nearby towns.

Erdene, a Red Kiln Kobold Scout comes tells you that his Khan - Ogo Skullbonker is old and wishes to provide an adequate foe for his clan to seek honour via and gain further strength. He warns that Ogo is coming to visit and gives you a choice. You can either create and place a Mountain's Windchime token in your base so that Ogo sees your respect for him, or you should be prepared to be raided.

Ogo drops a unique weapon called The Bonker when killed.

Monsters: Ogo Skullbonker - an Orc Chieftain and a small army including a Kobold Scout Archer.

The Red Kiln believes that advancement can only come from conflict between equals. Khan Ogo is no longer. And where one falls, those stronger and more cunning will rise. Warchief Oghar Norwind approaches your town and states that he will do as Cid bade and respect the mark of the Four Colors. He states that you he will wait for you to place a Gong to signify you are ready for battle as The Red Kiln warriors are eager to obtain honour by defeating you.

Start: Place a Scout Decorative Gong created via the Blacksmith

Plot: Kobold Scout's will spy your Gong and yell gleefully that they want your treasure. After you defeat them, they will whimper that they are too weak and dare you to place an Elite Gong.

Start: Place a Elite Decorative Gong created via the Blacksmith

Plot: Orcs have contracted goblins to set up a camp so that the orcs can raid you. The Camp goblin seeks to bargain with you saying that if you give it wealth, it will prevent the orcs coming. You can do this to prevent fighting in this Arc, or you can fight the orcs.

Monsters: A small army of wolves, goblins, kobolds and orcs that come from a spawned camp. One Kobold Master Archer is included.

Start: Place a Decorative Master Gong created via the Blacksmith

Plot: By placing a Master Gong, you've challenged the Ogre Chief, who says the Cid Treaty will not protect you from his wrath. After his defeat, the Chief warns that his brethren from Capitol await to test their might upon any towns bearing the General's Gong.

Monsters: A horde of ogres accompanied by a sprinkling of their minions including a Kobold General Archer and several Kobold Master Archers that swarm you from a spawned camp.

Start: Place a General's Golden Gong created via the Blacksmith

Plot: The Golden Gong has notified the Orc Generals from The Red Kiln's Capitol that you are ready for battle. Eagerly they set up their camp and begin to wave you.

Plot: In recognition of your strength in defeating his chiefs and warriors, Warchief Oghar Norwind strides toward you with fearless bravado. After his defeat, he congratulates you on being a worthy opponent and thanks you for helping his warriors gain further strength. He mentions if you ever want to test your strength, you need only place another Gong of any of the 4 colours.